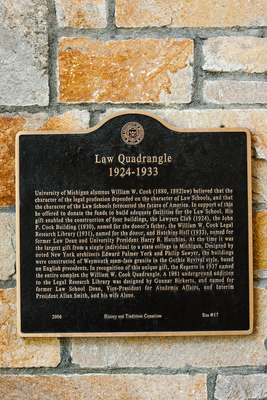 Posted on the center North arch of the Law Quadrangle, on the exterior, South University Avenue, side; posted in 2006 by History & Traditions Committee. Plaque text: Law Quandrangle, 1924-1933. University of Michigan alumnus William W. Cook (1880, 1882law) believed that the character of the legal profession depended on the character of Law Schools, and that the character of the Law Schools forecasted the future of America. In support of this he offered to donate the funds to build adequate facilities for the Law School. His gift enable the construction of four buildings, the Lawyers Club (1924), the John P. Cool Building (1930), named for the donor's father, the William W. Cook Legal Research Library (1931), named for the donor, and Hutchins Hall (1933), named for former Law Dean and University President Harry B. Hutchens. At the time it was the largest gift from a single individual to a state college in Michigan. Designed by noted New York architects Edward Palmer York and Philip Sawyer, the buildings were constructed of Weymouth seam-face granite in the Gothic Revival style, based on English precedents. In recognition of this unique gift, the Regents in 1937 named the entire complex the William W. Cook Quadrangle. A 1981 underground addition to the Legal Research Library was designed by Gunnar Birkerts, and named for former Law School Dean, Vice-President for Academic Affairs, and Interim President Allan Smith, and his wife Alene.