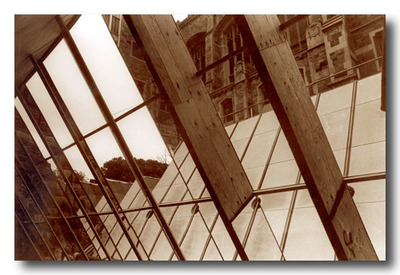 By the mid 1970’s, the Law School realized it badly needed new space. After several years of planning and investigation, Gunnar Birkerts and Associates, of Birmingham, MI, was chosen to be the architects. Birkerts, a native of Latvia, studied at Cranbrook under Saarinen and had already proven capable both of innovative design and of successfully adding to existing buildings. Ultimately, the University decided the best new building for the iconic Law Quadrangle would be nearly invisible: it would be underground, which presented special challenges both architecturally and structurally.

Construction began in 1978, and was fraught with difficulties. The excavation proved difficult because of the intermittent layers of sand and gravel put down eons earlier by the last glacier; the sides kept collapsing, and the project fell behind. Getting behind schedule created financial problems. It was a time of high inflation, and when agreements made by subcontractors expired, new contracts were more expensive. Finally, in August 1981, the building opened.